This trip was recorded in video for a segment of the Dimensions program on WFSU. Rob and his helper -- I think his name was Jason -- did a great job of putting hours of filming and interviews of three people together to show the magnificence of this wild river. Robert Daniels was with us, and Doug Alderson with a friend of David's whose name I cannot remember. 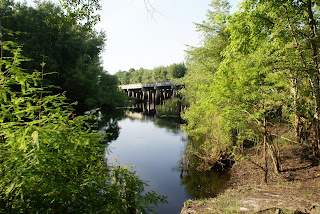 David Ward put our canoe in at Lamont at 9:00 AM. He paddled and I took pictures. It took us until 5:00 PM to reach a ruin of a railroad bridge in south Jefferson County. The only locating markers are the standing pilings that once held up the trestle. We exited the river where there was once a town called "Cash Money."

As we moved with the current down river we worked our way around many downed trees. Most of them reached almost completely across the wide river, leaving only a narrow place to canoe or kayak around. We finally found one place impossible to pass so we portaged around taking the opportunity to straighten up and stretch our backs. 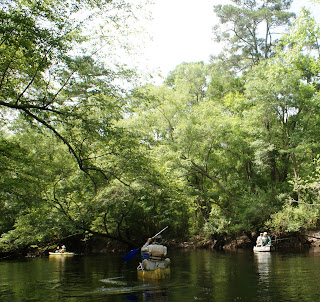 David and Robert had checked the passage only a few days earlier, but the river was lower and we finally came to a dead fall we could not go around or under or even pull our craft to the bank and portage around. I sat on the fallen tree, praying my camera was safe as the men pushed the canoe over the log behind me. It was tricky, but I made it back into the canoe without a mishap. All safely over,  we continued down the river.

It's plain to observe the interesting phenomenon of the different soils from one side of the Aucilla to the other. On the Taylor county side we could clearly see the Florida sandy soil and on the Jefferson County side the heavier clay soil that gives its name to the "Red Hills of Florida." Part of our interviews included a discussion of the effect the difference in the soils made for the Apalachees of the Red Hills and the tribes who lived on the sandy soils of eastern Florida. The Spanish traveling across this area commented in their dairies on the larger size and strength of the Apalachee, a likely result of better and more abundant food grown in better soil. 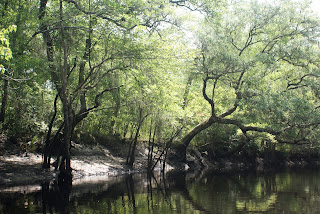