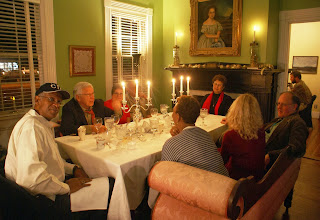 I’m so thankful I was born in the South. If I hadn’t been I would hire someone to teach me to speak with a Tidewater accent then I would lie. Yes, I would just plain-out lie. I’d swear I was born in Richmond Virginia or Monticello Florida. I’d have dozens of cousins and at least one eccentric uncle. My father would be handsome and my mother would be a true lady, educated somewhere like Mary Baldwin or Radford College. Southerners just know how to live.

Christmas dinner at the restored 1833 Wirick-Simmons House in Monticello was like taking a trip back in time—a house full of people, happy and interested, where even newcomers are treated as old friends. The lighting was a soft glow on the pale walls and high ceilings, showing off the museum quality furniture. It made the women more beautiful and the men more interesting.

The men and women of the Jefferson County Historical Association dressed the tables in white linen with crisp cloth napkins folded at each place. Polished silver utensils, a tall crystal wineglass and a stemmed silver water cup graced every plate. The candles flickered in soft breezes from the open doorways. Someone with artistic handwriting created name cards.

We talked—oh, how we talked—between each course of the delicious meal. We ate beef tenderloin done to a turn, served with potatoes, vegetables and tiny, delicious Parker House rolls. Our dessert was a piece of chocolate pie with a cherry sauce and steaming coffee. It was obvious no one wanted the evening to end.

The Wirick-Simmons House Christmas Dinner showcased our southern tradition of good food, perfectly prepared and elegantly presented to a house full of friends. Nothing could be better—it is the South at its best. 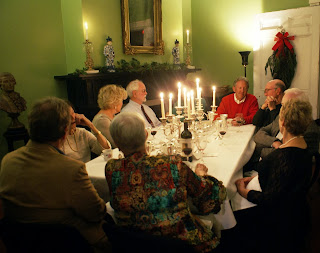 Posted by Anne Haw Holt at 5:34 AM No comments:


Florida Frontier: The Aucilla, Pinhook and Wacissa Rivers
We drove south out of Monticello at dawn. At Mandalay we slid an open boat into the Aucilla. Our guide Charlie Ward sat in the back at the tiller with Jack Carswell beside him. I sat amidships to take pictures.
A smoky look hung over the Aucilla. After only a few hundred yards the sun came out to throw sparkles over the rippling water. Charlie picked out his route along the curved riverbanks.
“There are sharp rocks hidden under the surface of this water. One of those things can rip the boat to pieces.”
We entered a maze of channels between curving stretches of marsh grasses dotted with palms, twisted cedars and willows. At Apalachee Bay Charlie pointed out Saint Marks Lighthouse and the almost hidden mouth of the Pinhook.
Charlie said the whole Pinhook area is mostly limestone under the reeds and grass. Trees rooted directly into slabs of moss-covered limestone hung over the water, closing out the sun. The river narrowed and banks came closer until our boat stopped, the keel caught on a tree stretched across the water.
Grabbing a nearby limb in one hand, Charlie yanked on the side of the boat and gunned the motor, sliding us across the log. The water became shallower and the river narrower. 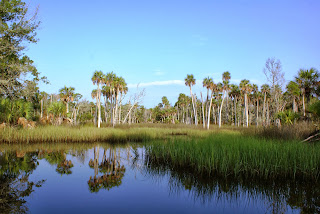 We turned to head back through the tunnel of trees. When we came out in the open again the sky was dark. As soon as we ran clear of the narrow part of the river we sped up, ignoring the danger of hidden rocks. We were unsure whether to head back to the Aucilla or make for Saint Marks by open water where we would be safe.
The sky turned purple and black, and a strong wind picked up. Jack and I argued we wouldn’t melt in rain and a case protected my camera. After a few miles of wind blowing in our faces the clouds moved over us and on to our west. The sun came back out.
As we turned north back into the Aucilla, we saw a gathering of Wood Storks resting on the limbs of a dead tree. One stork turned his back and spread his wings, appearing to pose for me.
As we headed up the river reflections of overhanging tree limbs cast patterns on the water. We turned left at Ward Island where Charlie stopped at a floating dock. Pointing to a path up a hill, he said, “Climb up there and you’ll see a real family fishing cabin. Those folks hauled every stick of lumber in here on a boat.”
Gray and weathered, the large structure looked shabby but sturdy. A covered porch ran across one side with a line of chairs backed up to the wall. I could picture a family enjoying the solitude--adults resting on the porch and children yelling and playing in the woods nearby. 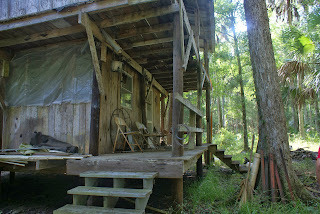 Leaving the river, we followed the same route back to Monticello until Charlie turned onto a narrow lane to show us the headwaters of the Wacissa River.
The river is pristine—as clear as the springs that feed it. Narrow and twisted, it is land-bound and finally disappears into the earth. Its waters connect with the Aucilla through a “Slave Canal,” cut by hand in antebellum times.
A large part of Jefferson County is like these rivers, still unchanged in hundreds, perhaps thousands of years. Much of the route we covered on this trip is a land and waterscape untouched and undamaged, rare and beautiful. 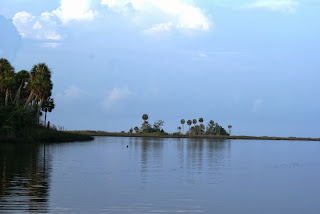